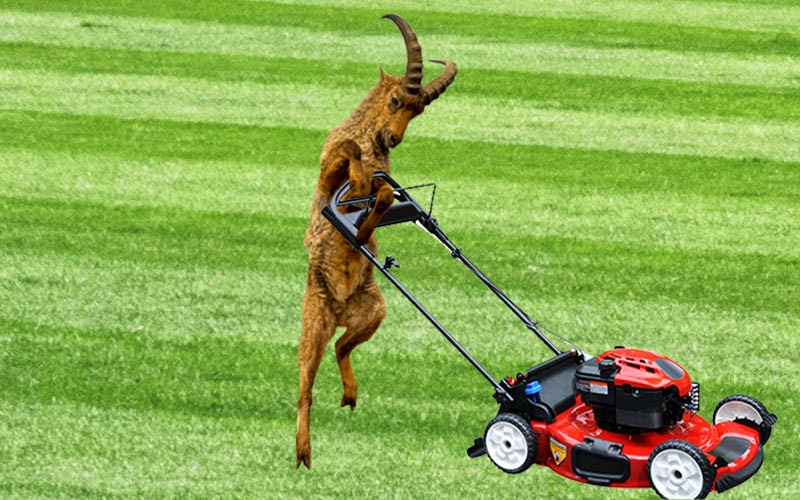 The Washington State Department of Transportation (WSDOT) is responsible for managing non-native vegetation along our
highways, such as Knapweed or
Dalmatian Toadflax. Typically, the Department uses mechanical mowing and
herbicides to control these weeds.

They’re trying something new- and more organic- to go with our new freeway however.
Goats will eat almost any kind of vegetation right down to the
ground.  There has been extensive research on the use of goats and sheep
for vegetation management and noxious weed control over the years.

In 2014 the WSDOT did a “pilot program,” leaving a herd of seven to 15 goats in a fenced storm water retention pond on the other side of the state. In addition to the Japanese knotweed they ate, all the goats needed was water and they did a great job.

In the 2015 growing season, WSDOT will conduct a pilot project to study the use
of goats as a mowing tool on state highway rights of way.  The pilot will
include utilizing “grazing contractors” in Olympia
and Spokane.  The trials are designed to study the use of grazing for
vegetation management situations found within the highway right of way.

In Spokane, the goats will be used in a couple of areas along the North
Spokane Corridor, totaling about 15 acres. This trial will be conducted using a
contractor who will remain on site for 5 to 10 days and supervise 250 goats within
an already fenced area along the NSC Children of the Sun trail.  The
grazing will be done late spring/early summer to prevent normal flowering and
seed production.  This allows for more effective weed control with
herbicide later in the season when perennial weeds are most vulnerable.

Although goat usage will cost a little more than present weed control
methods, unlike mowing, by the time a seed passes through the goat, it
apparently has become sterilized and cannot produce another plant when
re-deposited on the ground.  Data will be collected throughout the
process and an analysis of feasibilities and benefit/cost will be prepared in
the fall of 2015.