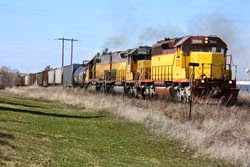 The Washington State Department of Transportation (WSDOT) is planning some improvements to
the Palouse and Coulee City (PCC) Rail system, as part of an effort to support area farmers, and is looking for input on them.

The plan indicates that private and public investments in the rail system have not kept pace with preservation and maintenance needs. Trains must run at slower speeds in some areas due to rail conditions. The strategic plan includes a list of capital-project priorities, including several that use lowest-cost options to maximize investments.

Comments on
the draft plan will be taken until Tuesday, March 31.  Comment
forms are available online and may be submitted through the link or emailed
to freight@wsdot.wa.gov.

Once finalized, the plan will be used to help develop future funding, policy and planning goals.