WSDOT Getting Out The (New) Big Guns This Winter 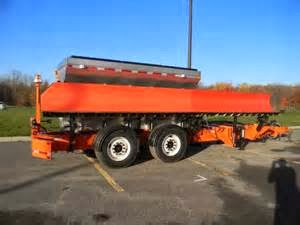 You may see a new tool being used to fight snow on area highways this winter. The
Washington State Department of Transportation Eastern Region maintenance crew will be using an innovative “tow plow” on
several highway sections for the first time.

A tow plow is a plow mounted on a trailer pulled behind a standard
truck-plow.  When the operator needs to plow two full lanes the tow plow
is maneuvered to the right.  The trailer wheels shift
to skew the trailer at an angle then the blade drops down, doubling the width
of the plowing operation.

This saves time and fuel by being
able to clear two lanes, or a lane and shoulder, in a single pass with one
vehicle.  The tow plow also has a hopper and spreader that can place sand
or de-icer at the same time.

The new unit will be based in the
Spokane area and primarily used on Interstate 90, US 395, and the North Spokane
Corridor.  This is the first tow plow operated by WSDOT.