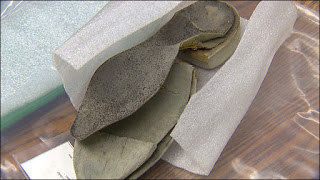 Workers recently made a big find while building a rainwater storage tank under Seattle’s Magnolia Bridge- over 2,500 artifacts dating back as far as the 1700s.
KBOI2 News reports that most of the items are believed to be from Finntown, an immigrant community along Smith Cove from 1911 to 1941. The recovered objects include Prohibition-era alcohol bottles, old shoes, eyeglasses, suspenders, a token for the old Seattle Municipal Railway and even children’s toys.
Several artifacts show the presence of Native Americans, including a chisel likely built from an elk bone. One particularly surprising discovery was a Chinese coin dating back centuries, likely brought to the area by an immigrant.
The area was cleared out by the military during World War II and taken over by the Navy. Residents were evicted and the shantytown on the site burned to the ground.
Once the items are cleaned and catalogued, they will be put on display for the public at the Burke Museum.