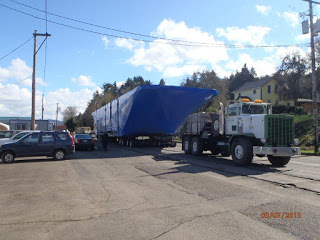 At our monthly Board meeting yesterday, a staff member from WSDOT talked about the journey of part of the new Keller Ferry boat from Oregon to it’s new home on the Columbia River near Grand Coulee earlier this week.

The moving of the hull by semi was called a “super load” (versus the controversial mega loads of last year) due to its size. The trip was an arduous one at a top speed of 14 miles per hour across two states (reminds me of a trip through three states I took on a tiny spare tire last summer). The piece was so big that it had to go through Portland at night last Friday so as not to disrupt traffic.

The new boat is called the “Sanpoil.” Sanpoil is the Anglicized form of the name given to the Columbia River, as well as to the ancestral and current native residents of the area it will serve. Parts for the boat were made in Rainier, Oregon and the whole thing will be assembled onsite near the river. The boat is expected to be launched in July 2013 and will replace the current vessel, the 65-year-old Martha S.