What Can Stop The World’s Biggest Drilling Machine? Possibly Megatron? 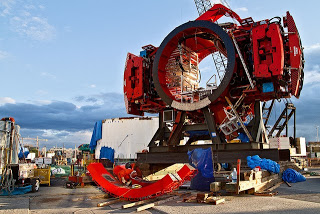 Big Bertha has ground to a halt. Literally. The giant boring machine that is being used to drill a tunnel under Seattle for the SR 99 construction project has been stopped in it’s tracks by an unidentified object.

No big deal, just dig out the rock that’s jamming it right? Not so much. Big Bertha is designed to not be stopped by ANYTHING so there’s a lot of speculation as to what brought the big drill to a stop.

Some people think the mystery object in question is a giant ice age boulder, buried train engines or other debris from when fill was used to make a solid base out of a wetlands to build the city on, or (my favorite speculation) that it’s Megatron.

What do you think it is? Read the Gizmodo article here and let me know if you have any insights of your own.