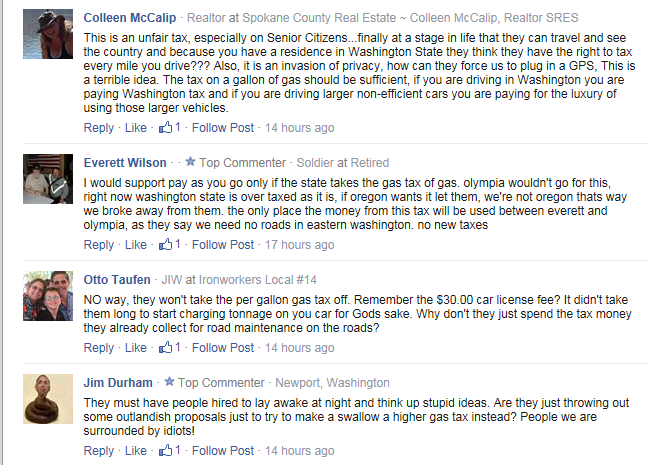 KXLY News yesterday ran a story on the Washington State Legislature’s proposal to test out a pay by the mile tax within the next couple of years that would tax drivers for every mile they drive on public roads.

At first, it would be a pilot program but if succesful, as the pilot was in Oregon, it would eventually replace our current per-gallon gas tax altogether.  When KXLY asked watchers to weigh in on the possibility, the comments were overwhelmingly negative. Some sample comments are below- click to see them full size. There were a handful of respondents who pointed out that the roads are in terrible shape and we need a new way to pay to fix them. With cars more fuel efficient, the availability of alternative-fuel vehicles, and more people using public transit, the money raised by the gas tax is dropping and isn’t enough to cover our basic needs.

For the most part though, people who responded to the KXLY article called the idea “insane,” “communism,” and “big brother.”

Read the article (and the comments if you dare) here then feel free to let us know what your take is.