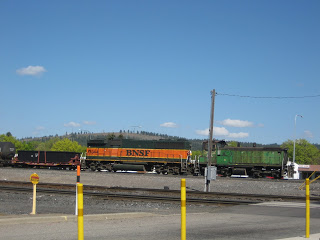 Washington’s two senators are working on legislation to drive more planning and funding to freight. Sens. The Spokesman-Review reports that Patty Murray and Maria Cantwell, both Democrats, are sponsoring a bill called the National Multimodal Freight Policy and Investment Act.

The legislation would be a plan for reducing freight bottlenecks and congestion across the country, and increase funding for grade separations, to build bridges and tunnels to separate roads from rail.

In a news release, Cantwell said the U.S. must improve its freight infrastructure to remain competitive. Freight delays cost the U.S. economy about $200 billion a year, according to Cantwell.

The bill would authorize spending $2 billion a year through 2021 on multimodal freight projects.
There is also a smaller amount of money for upgrading short-line tracks where they intersect with mainline tracks.