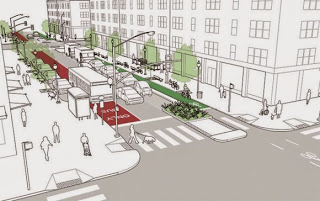 This is pretty cool! The Washington state Department of Transportation is the first state DOT to
endorse the Urban
Street Design Guide put out by the National Association of City
Transportation Officials’ (NACTO).

Lack of official recognition by
state DOTs can make it difficult to install some amenities, especially
on streets classified as state highways. But Washington cities and towns will have more flexibility to do so. Here’s more from DC Streetsblog.