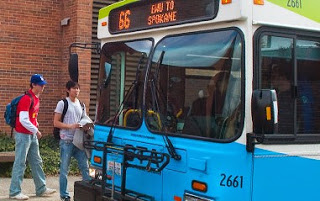 According to the Spokesman-Review, the measure calls for a tenth-of-a-penny sales tax increase next April and a second tenth of a penny in April 2019, with both taxes running through 2028.

The funding – more than $200 million over 11 years – pays for many improvements in every neighborhood across STA’s service area from more night and weekend buses to new park-and-ride facilities.

The local taxes will be leveraged to take advantage of $86 million in state and federal grants to pay for the new Central City Line electric bus route from Browne’s Addition through downtown and the University District to Spokane Community College.

Also in the budget is $12 million for a new West Plains Transit Center at the Medical Lake interchange on I90. Bus service will be expanded on Indiana Avenue east of Sullivan Road to Greenacres. Park-and-ride lots will be added or expanded at Liberty Lake, the Mirabeau Park area, Moran Prairie and Spokane Community College.

Liberty Lake will see renewal of nonstop express service while north and south Spokane will be connected with a through route from Five Mile to Moran Prairie.

Near the end of the 10-year implementation, an experimental run into Post Falls and Coeur d’Alene will be tried in 2025.