U.S. Drivers Are Distracted 50% of the Time 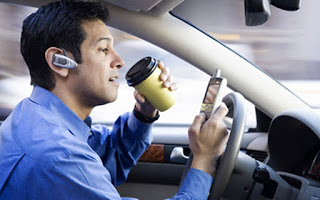 We’re definitely a distracted nation but these numbers scare me. A new study out of Virginia Tech published in the Proceedings of the National Academy of Sciences last month says drivers are distracted more than 50 percent of the time.


Citylab reports that nearly 70 percent of the crashes the researchers analyzed for the study involved some type of observable distraction. The study’s lead says this could because the younger population of drivers, particularly teens, are more prone to engaging in distracting activities while driving; particularly using cell phones.

For study, the Virginia Tech researchers, used 3,500 study participants who agreed to let researchers mount cameras, sensors, and radar inside their vehicles, tracking and filming the drivers everywhere they went for a three-year period.

Researchers also witnessed “driving while emotional;” aka being sad, crying or displaying “emotional agitations.” This only happened about 0.2 percent of the time, but it increased the risk of an incident by nearly 1000 percent compared to model driving.

What distractions seemed a-okay? Applying makeup while driving didn’t appear to be as risk-averse as you would think. Eating and drinking (nonalcoholic beverages obviously) didn’t make much of a difference, either.

Drug and alcohol use was observed just 0.1 percent of the time, but it increased the risk of crash by a factor of 40.