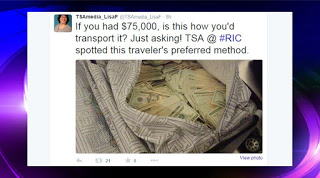 We tweet a lot of stuff these days, way more than most of us need to know about. But some people
are saying the TSA went overboard recently when they tweeted a picture of $75,000 in cash a passenger was trying to take aboard a plane.

NBC 12 says other tweeters responded to the picture, asking if it’s legal to publicly post pictures of what’s in a passenger’s personal luggage or if the TSA felt they had maybe put that passenger in danger of theft or other crimes.

The money never made it on the plane; because the “owner” didn’t have a bill of sale or another way to prove the cash wasn’t the result of some kind of  crime, it was seized by the federal goverment.