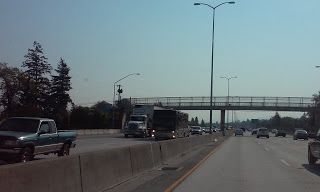 I drove by this incident yesterday going the opposite direction and caught some of the backup that resulted from it.

A truck pulling a trailer that was carrying a backhoe on Interstate 90 clipped a pedestrian overpass near Havana Street yesterday morning.

Some westbound lanes were closed for about two hours. The collision knocked off chunks of concrete and displaced a steel rod.

Washington State Department of Transportation spokesman Al Gilson said crews took photos of the bridge and sent them to experts in Olympia, who determined that the damage is mostly cosmetic and the bridge is safe for normal use. Minor structural repairs are expected soon, he said.