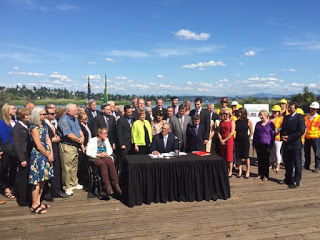 Washington governor Jay Inslee signed a package of transportation bills into law yesterday that includes an 11.9 cent gasoline tax increase and about $16 billion worth of projects around the state.

The package took nearly three years of negotiations, compromises, false starts and debates in the Legislature.

The first 7 cents of the new gas tax starts Aug. 1.

The list of projects to be paid for with the gas tax increase includes about $1 billion for the Spokane area. Eight hundred seventy nine million of that will go to finish the North Spokane Corridor over approximately the next 14 years. The package also includes money for interchanges on Interstate 90 for Medical Lake and Liberty Lake, a passing lane on U.S. Highway 195 between Spangle and Colfax, the Spokane Transit Authority’s proposed Central City Line, the University District Gateway Bridge for bikes and pedestrians, and the Palouse River and Coulee City Railroad rehabilitation. Construction on the projects is scheduled as far out as 2031.