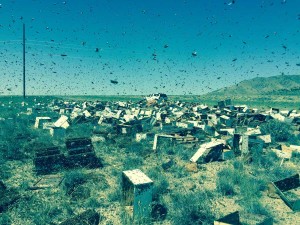 I got stung by a bee under my eye one time and my head swelled up so much that I looked like John Merrick, the Elephant Man, so this story scares the heck out of me.

According to EastIdahoNews.com,  a semi-truck crash near Howe, ID (nope, I don’t know where that is either) this morning released approximately 20 million bees being transported to North Dakota to make honey.

Sheriff’s reports say a Freightliner carrying 408 beehives swerved off the road, tipped over on its side, righted itself and kept going about 75 more yards before finally stopping. It’s not clear what caused the initial swerving.

The beehives were completely destroyed, releasing millions of bees alongside the highway. The truck driver was uninjured but took off running down the highway.

“There is really no saving them when it is this bad,” Wiggins said. “All the bees that escaped will be dead by tomorrow, because they can’t live without their colonies.”

The remaining bees at the crash site were killed with foam by emergency responders who said they would be a hazard to driver, especially motorcyclists, if they weren’t killed.