Top 11 Excuses Used By People Pulled Over By Police 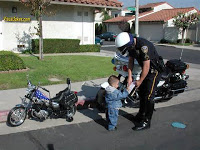 If you’re a woman, crying works sometimes to get you out of a traffic ticket. And people are apparently willing to try a lot of other ploys and excuses as well. A recent survey by Insurance.com reveals the most frequent excuses drivers give to traffic cops:

1. “I couldn’t see the sign telling me not to do it.”
2. “I’m lost and unfamiliar with the roads.”
3. “I didn’t know it was broken.”
4. “Everyone else was doing it.”
5. ‘I’m having an emergency situation in my car.” (A spilled a hot drink, for example.)
6. “I missed my turn/exit.”
7. “I had to go to the bathroom.”
8. “I didn’t do anything dangerous.”
9. “I was on my way to an emergency.” (To help someone who is ill or injured, for instance.”
10. “My GPS said it was the right thing to do.”
11. “I’m just helping out; I wasn’t even supposed to be driving.” (Such as for an intoxicated friend.)
The survey also found that men and women explain their mistakes in different ways, with women being a lot less embarrassed to share personal information apparently.