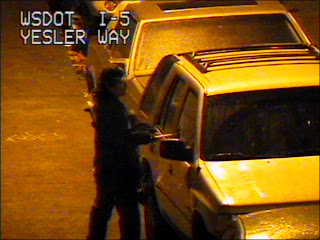 Downtown Seattle traffic cameras caught more than just traffic the other night. According to KOMO News, they caught some criminals in the act of breaking into cars.

DOT operators were monitoring the cameras when they noticed something odd on the Yesler Way overpass in downtown Seattle just after 4 a.m.

They spotted a couple of men peeking into cars. Suddenly one of the men appeared to smash a window.

The DOT operators called Seattle police and officers responsed within two minutes and took the suspects into custody.
The Spokane Regional Transportation Management Center is within the SRTC offices. It’s where all the local live traffic camera feeds are monitored. So I asked the operators in there what’s some of the craziest stuff they’ve seen. One operator saw a man near Argonne and I90 use a rock to break a window out of a disabled vehicle. He said he called police and the man was picked up.

He also saw a guy walking down the Sunset Hill in the middle of the night pick up a beer can from the side of the road and drink out of it. There’s also been a child riding a bike on the freeway and my favorite, a man walking late at night who stopped to urinate over the jersey barrier. The lesson here folks is that, even when you think you’re alone, you really aren’t.