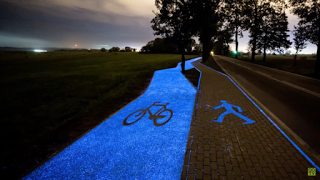 I am truly giddy about this. Anyone who knows me knows that I geek out over anything that lights up, changes color or glows in the dark. So I’m moving to Poland. That’s where a new concept in bike paths is being tried, according to the Huffington Post.

Yes, glow in the dark bike paths!! The asphalt contains synthetic particles called “luminophores,” that emit power captured from sunlight at night, creating an electric blue color that lasts up to 10 hours. During the day, the path is a pretty blue color.

Apparently a lot of pedestrians and bicyclists are out at night in Poland and have a lot of accidents, especially in areas farther from cities. Right now only one path has these glow-in-the-dark powers but if they work well, more will follow.