The Professions With the Longest Commutes? 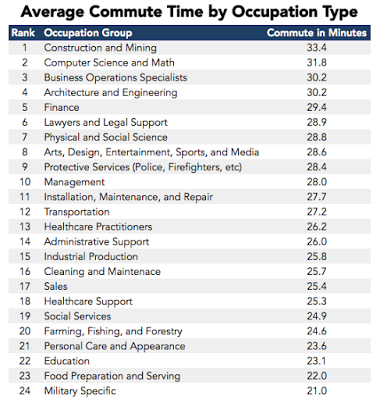 When we decide what we want to do with our lives, we generally don’t factor into ours decision our future commute. But maybe we should. Lengthy commutes are now being associated with back pain. bad eating choices, a lack of exercise, and less quality time with family.

So if you could decide on a career based on the commute, which careers would you want to avoid? Priceonomics analyzed U.S. Census data to see which jobs have the longest commutes. Results showed that construction workers, computer scientists and lawyers have unusually long commutes. Conversely, food industry workers, military members, and teachers apparently live close to their places of employment.

The table below shows the average commute time by 24 categories Priceonomics grouped data into.