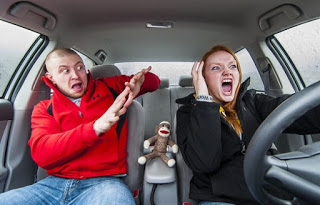 Are women more affected by road rage than men? That’s what a new study suggests, according to the DailyMail.com. The study, by car manufacturer Hyundai, involved 1,000 drivers in the UK, 450 of who were also tracked using a webcam.
Participants were tested to see how sound, sight, smell, touch and taste provoke emotional responses while driving. The results were fed into specially-created software that gave each participant a ‘Driving Emotion Test’ score.
The results claim that, on average, women are 12 per cent angrier than men when behind the wheel. Researchers suggest that driving sparks an ancient defense instinct that kicked in when women were shouted or beeped at, subjected to a back-seat driver, or faced with a driver who didn’t use their signals.
Evolutionary theory suggests our early female ancestors had to develop an acute sense of danger for anything that threatened them if their cave was undefended while men were out hunting. Study organizers claim that “early warning system” instinct is still relevant, and women drivers tend to be more sensitive to negative stimuli, so get angry and frustrated quicker.
Other key findings from the study include:
– The primary reasons people enjoy driving is the freedom it gives them, mobility and independence
– 29 per cent of men said they find it easier to have a conversation in the car.
– 54 per cent of Brits said the thing that made them really happy in the car was singing
– Eight out of 10 people nearly always listen to something while driving with Meatloaf’s Bat out of Hell and Queen’s Bohemian Rhapsody being the most mentioned.
My personal take on this study? Since previous studies have mostly showed men to be the aggressors behind the wheel, I’m going to blame this one on the British. Maybe British women are more aggressive than American women? And the British apparently have bad musical taste. I mean, come on, who admits to liking anything meatloaf-related??