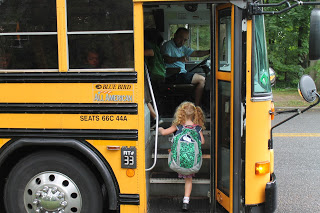 Results show that overall, 44
percent of children in kindergarten through 8th grade ride the school bus, 38
percent are dropped off by a family member or friend, 15 percent walk and less than one
percent ride their bikes.

About a third of students live within one mile of school and over half live within two miles of school. As expected, those that live within one mile are more likely to walk (39%) or bicycle (3%) than those who live further away. When asked about barriers that keep children from walking or biking to school, more than 50 percent of the children who responded said distance, the age of the child (too young), unsafe roads to cross, convenience of driving, poor weather, speed or amount of traffic along the route, time, and a lack of sidewalks.

Very interesting. My neighborhood is a fair distance from all three schools so the majority of children ride the bus (and I know because I get stuck behind it almost every day). But what kills me is that, from my observation, a large number of parents also drive their children to the bus stop. Which I find odd because, as far as I can tell, not many of the students live far from the stop; probably a block or so. I know this because I also get stuck behind the parents as they’re pulling out of their driveways, then stop in the middle of the road a block later to let their kids out at the bus stop.

If you would like to see more results and recommendations from the Washington State Student Travel Survey, the full report is here.