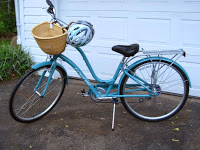 Congratulations to the City of Spokane Valley for being ranked as a “Top City for Women Bicyclists” by The
League of American Bicyclists (TLAB)!  According to a news release from Spokane Valley, the ranking is based on
Spokane Valley’s higher than average bicycle commuter rate of 1.1 percent,
which is almost twice the national average of .6 percent.

Spokane Valley’s top ranking was
cited in TLAB’s report “Where
We Ride:  An Analysis of Bicycling in American Cities.”
Data for the report was gleaned from the U.S. Census Bureau’s American
Community Survey for 2012, which includes statistics on commuting habits.
Spokane Valley has a Bike and Pedestrian Master Program
(BPMP) aimed at increasing bicycling that includes an inventory of the city’s existing bicycle network and
recommendations for future enhancements.  Right now, there are about 76
miles of bike lanes and recommended bike friendly routes as well as 9 miles of
pedestrian/bicyclist shared use pathways.
The City is also working on a
bicycle tourism map of Spokane Valley to be released around
the end of the year. More information about Spokane
Valley’s Bike and Pedestrian Master Program is available at www.spokanevalley.org/BPMP.