Some Input I Heard At Last Night’s Open House 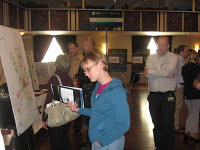 So I’ve been to a TON of public open houses and meetings over the years, both in a working capacity and as a concerned citizen. I have to say that last night’s open house with Spokane Transit was one of the best though.
There was such a huge crowd that both our planner Ryan and I were busy talking to someone the entire time! Had I known, I would have roped another employee into coming with us. 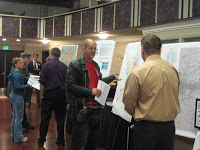 We got lots of great input too. Last night seemed to be the evening for safety concerns- at least among the people I talked to. I talked to a nice lady about trying to get a crosswalk in front of the Goodwill store downtown. Another woman commented on the incidence of pedestrians being hit by cars in Airway Heights and a gentleman had concerns with a couple blind corners around there area.
While there were a lot of familiar faces attending the open house, I also talked to a lot of people I’ve never seen before. One woman from Boston was telling me how she and her husband didn’t have a car while going to school in Boston and how it’s shaped their worldview, especially now that they’re living in Spokane. Another told me about her recent trip to Portland and riding the lightrail. And a third told me about her knee surgery. Well, believe it or not, it’s applicable as it impacts what kind of transportation options are available to her.
Anyway, nice job planning and publicizing such a great event Spokane Transit! And the food was awesome too.