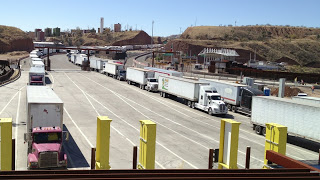 Budget-cuts from the government sequester could affect what you pay for produce.

Customs and Border Protection officers regulate trade at the country’s 329 ports of entry, in harbors, airports and on land. More winter produce enters the U.S. at the Mariposa Port of Entry in Nogales, AZ than anywhere else.
Cargo from the port also makes its way to Canada and Asia. Up to 1,600 trucks a day come through the port.

With sequestration cuts in effect, though, port officials have to reduce costs. Local officials wouldn’t confirm how that’s supposed to happen, but it could involve operating the port fewer hours or employing fewer officers to check the trucks waiting to cross the border. Either way, it means less produce getting into the country, more food spoiling and higher prices for the food that does make it across.
NPR has more on the impacts to the economy. And you.