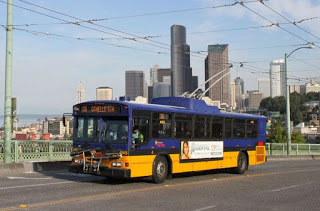 A new pilot program in Seattle could make it easier for some commuters to jump on the bus or light Next City says that a partnership between King County Metro Transit and Diamond Parking will allow people and businesses to rent out parking spaces near frequent transit services and park-and-rides.

rail rather than driving their own cars.

Participating building owners and property managers need to offer at least 20 spaces attached to multi-family or mixed-use residential developments to be eligible for the program. Parking spaces must also have safe pedestrian connections within a quarter-mile of a frequent transit service. King County Metro will market the program, and Diamond Parking will manage the logistics.

A survey by Metro found that daily park-and-ride users said they would be willing to pay about $44 to $110 per month for a guaranteed parking space near their transit stop.

Seattle has the fifth-worst traffic in the country, and during evening commute hours nearly three-fourths of roads are congested. Yet half of Seattle residents still drive to work. Metro is hoping making more parking available near transit will change that by motivating more people to use public transit.

The parking pilot program will begin early next year.