Seattle Business/Political Leaders Get Together to Address Transpo System Flaws 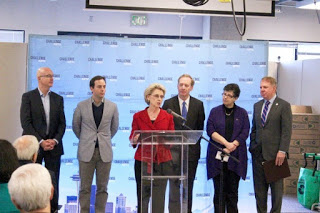 Seattle is taking a long hard look at it’s transportation system and saying “it’s not good enough.” According to GeekWire, leaders from the region’s public and private sectors have started a new non-profit initiative led by former governor Christine Gregoire called Challenge Seattle. It includes participation from 17 major companies like Boeing, Amazon and Microsoft and will take on issues like education, job creation, and now, transportation.

The group yesterday announced a plan to address a transportation system that’s not up to par with the rest of what the City has to offer. It includes making I-5 into a “smart corridor”; building a better framework for coordinated operations and planning; putting citizens at the center of transportation planning; maintaining existing assets; creating a sustainable funding model; and integrating planning and policy development officials.

Challenge Seattle also committed to have no more than 35 percent of its employees commuting via single-occupancy vehicles by 2035. Microsoft is contributing by offering space on its campus to test intelligent highway solutions as part of the initiative.