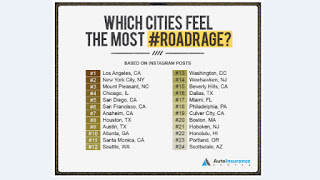 We’ve all done it- lost our cool while in traffic and done something inappropriate or aggresive in reaction. A new study shows where and when we tend to get road rage, and Washington State, Seattle in particular, ranked high on the list.

According to KIRO 7 News, Seattle ranked number 12 on the list of cities that felt the most road rage, with Washington ranking number 10 for states.

The data was derived by website Auto Insurance Center, which looked at 65,535 Instagram posts between June 2013 and April 2016 with the hashtag #RoadRage.

The study also analyzed when we are most susceptible to road rage. August appears to be the worst month and Fridays the worst day of the week for road rage.