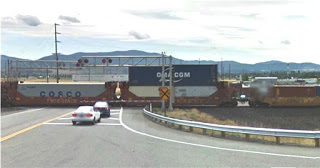 From where we sit, this didn’t come as a big surprise, but the Spokane Valley Herald is reporting that the Burlington Northern Santa Fe and Union Pacific railroads will most likely not partner to work with Spokane Valley to separate train traffic from the roadway for the Bridging the Valley (BTV) series of projects.

Bridging the Valley originated at SRTC. It was a series of over- and underpasses stretching from the City of Spokane to Athol, ID that would reduce the number of at-grade railroad crossings where vehicles could come in contact with trains.

At a recent Spokane Valley City Council meeting, representatives from Sen. Patty Murray’s office
and BNSF said a partnership was unlikely. The original  plan was for the two competing railroads to use the same main lines through the region, reducing the number of grade-separations necessary.

Trains servicing and switching cars at the Inland Empire Paper mill in Millwood often  back up traffic to Trent to the south during busy drive times. Other crossings, such as at Trent and Barker, have about 50 trains that go through per day. A BTV project to construct a bridge over that crossing is estimated to cost $29.2 million, and efforts to secure state and federal funding haven’t been successful so far.