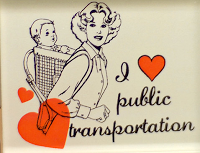 So there’s this guy on the bus that I’ve had my eye on for a while. But I’m not sure if he’s single. Mostly because he wears a clown suit and makes balloon animals for the women and children. So what do I do? If I approach him and he’s married I’m going to feel like an idiot. But if I don’t, am I missing out on the amn of my (circus) dreams?

If I lived in Prague, I wouldn’t be in this conundrum. Because transportation officials there have come up with an idea to get single riders together. They are introducing cars on the metro specifically for singles. The reasoning behind it is that single people today don’t have the time to meet people and it’s hard to meet quality people in bars, so why not meet doing something you already do- ride public transit?

There are some obvious issues to work out to keep the cars from becoming rolling hookup spots though, and to address potential liabilities. The Atlantic Cities has the story.