Proposal Calls For Limiting I-5 to Self-Driving Cars 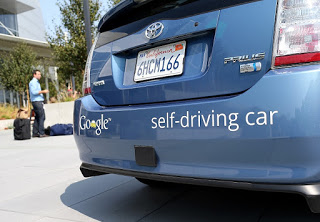 I’ve been stuck on I-5 in Western Washington several times lately, but I’m not sure this is how to fix Kuow.com reports that a proposal to ban human drivers from the freeway is being discussed at a technology conference in Vancouver, B.C., that Washington Gov. Jay Inslee, B.C. Premier Christy Clark, Seattle Mayor Ed Murray, and Microsoft founder Bill Gates are all expected to attend today.

the congestion problem.
Seattle’s Madrona Venture Group suggests that a 150-mile stretch of the freeway between Seattle and Vancouver be occupied only by driverless cars — except for quiet times at nights and weekends.

Under the idea, robot-cars would just get to share the HOV lanes on I-5 to start. Over time, the driverless cars would get their own lanes, then eventually all the lanes 10 to 15 years from now, allowing human drivers on I-5 only during non-congested times such as weekends and 8 p.m. to 4 a.m. on weekdays.

The brains behind this suggestion say a driverless I-5 would boost business and tourism between the two cities. Some critics disagree though. University of Washington civil engineering professor Don MacKenzie said social equity must be considered and that a huge number of families with older vehicles would be out of luck. MacKenzie says that, with 60 percent of cars in the U.S. lasting 15 years or more, about 1.5 million cars will still be on the road in Washington in 15 years that were manufactured this year or earlier.