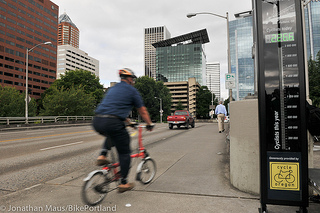 Start the countdown. Or the count up, in this case. A new bike counter (a.k.a. the bicycle barometer) — the first of its kind in the United States — went live at midnight last night and at this morning’s press conference to unveil it, the number of bikes that had crossed it was already well over 2,000.

The counter works via four sets of air hoses strung across the Hawthorne Bridge path. When someone on a bicycle rolls over the hoses, their weight depresses the hose, which creates a pulse that is converted into a radio signal that beams wirelessly to the counter. We’ve got something similar to this on the new Children of the Sun Trail that is part of the North Spokane Corridor, but nothing on a regular roadway.

Bike Portland has the full story on what they plan to do with information gathered by the counter.