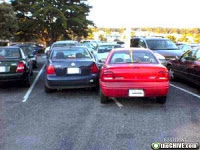 See poorly parked cars regularly? Instead of leaving a nasty note on the windshield you can use a new app to flag it for towing.

It started in Toronto where it’s apparently caught on with cyclists. McArthur has apparently met with some of the mayor’s staff, and has also reached out Traffic Services, who have contacted him to discuss the app.

Right now though, TowIt seems most useful for shaming lousy parkers online. You can find out more about the app from CityLab.