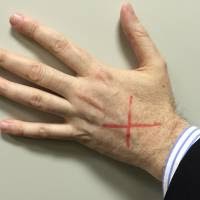 Japanese police are taking a new direction to protect women from being groped on trains. Apparently it’s a very common problem, and getting worse. The Japan Times News reports that Police in the Saitama Prefectural produced a sticker that women can put on their bag, phone or anything else they carry. It says “Don’t touch!” on it. Really scary right? Not so much. When groped, a woman shows the sticker to the offender as a warning. If it continues, the victim can peel off the first layer of the sticker which exposes a red cross in special ink which the person can apply to the offender’s hand like a stamp, leaving proof of criminal conduct.

So far, it’s not clear if the sticker is having the desired effect.