Pedestrian Traffic Icons Around the World 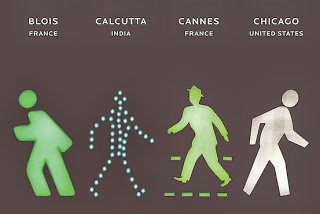 Apparently the stick figure crossing the road on pedestrian traffic lights isn’t a global symbol. In some parts of the world, that figure is just lighted dots. In one area of the Netherlands, it’s a woman with heels and a ponytail. And in Cannes, France, it’s a dapper man in a suit and hat.

A New York artist has a display right now of her “Walking Men Worldwide” project, made up of photographs from all over the world of the icons used around the globe to signal people that it’s time to cross the street.

The Wall Street Journal has the story.