Our GIS Analyst Is Hobnobbing With The Stars 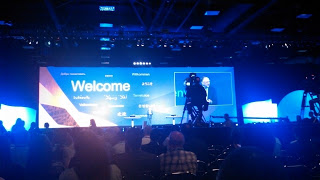 Apparently I’m going about this wrong. I’ve been at SRTC for seven years now (as of next week- happy anniversary to me) and the only training I ever get sent to are in Boise or the Tri Cities. Yet our Geographic Information Systems (GIS) Analyst Kevin is at a the annual ESRI conference in fabulous San Diego right now where he’s playing computer games and hanging out with musician will.i.am. 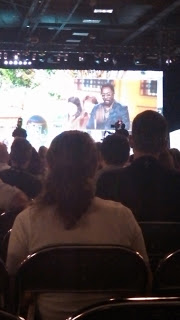 Okay, I made that last part up, but it’s somewhat based on reality. Kevin was able to work it this year so that he could attend the conference, with his only expense being airfare. We don’t usually attend conferences, as money is obviously VERY tight in the government world and we find we get better results from attending training sessions versus conferences. But with plane tickets being pretty affordable these days, we decided to take advantage of it, as the conference is reported to be a pretty intense learning experience.

Every year, about 12,000 GIS users gather for this conference to learn new ways that geographic information system (GIS) is integrating hardware, software, and data for managing, analyzing, and displaying all kinds of different information. In our office, Kevin and our other GIS Analyst Sylvia, use GIS to make maps and other kinds of displays for any of the reports and documents we create. We also use their visuals at all of the public meetings and events you see us out at. 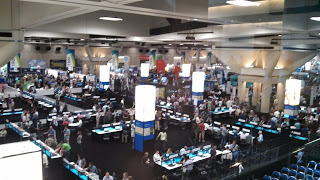 While GIS technology can be used on any kind of data, Kevin is sitting in on mostly just the transportation sessions at the conference. Don’t feel bad for him though. He said he’s met a lot of talented staff from other Metropolitan Planning Organizations and that at the opening session will.i.am from the musical group the Black Eyed Peas showed up!

I asked what a hip guy like that was doing at a technical conference and Kevin said will.i.am
stumbled onto GIS through non profit work he was doing and felt he had to get in on it and
figure it out. So if you want to be hip and figure it out as well, here’s more info on the ESRI GIS conference.