Not Doing So Well At March Madness? Try Population Bracketology Instead 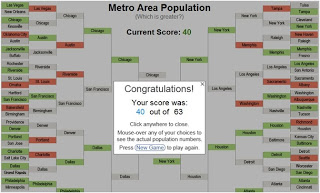 Not doing so well on your March Madness bracket? Well, there’s an alternative. The U.S. Census recently released a bracket game of its own pitting 64 cities against each other by population size. Choose wrong and the government will leave that city out of 2020 census (well, OK not really, but you might be uninvited to your friends’ next pub-trivia night).

“Population Bracketology” is being called an “addictive pastime for anyone who thinks they know the relative size of every major American city.” So, I wasn’t surprised at all when I asked my Geographic Information Systems (GIS) guy Kevin if he’d played it and he said yes, and he’d done pretty well.
Here’s how it works: Start by choosing your geographic level: metro areas or states. Click on the name in each match-up that you think has the larger population. Green shows a correct answer, red indicates an incorrect answer. When you have opposing names picked for the next round, pick again. See how close you can come to a perfect score of 63. When you are finished, play again or mouse-over results to view the most current population estimates for each pair.

Click here to play. And if you do, let me know how you did. I’ll tell you how you stack up against Kevin.