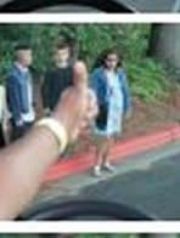 North Carolina admittedly has an issue with students being killed or injured by drivers passing
stopped school buses. Thirteen students have been killed in this way since 1999, four during the 2012-2013 school year alone. So what are school officials doing about the problem? They’ve added new lights on buses and additional stop arms and now they’re implementing hand signals.

Yep, hand signals. Even after a bus stops. Students aren’t allowed to approach the vehicle or department from it until the driver signals them to do so with a series of hand signals. According to the Courier-Tribune, in the morning, bus drivers must first hold up his or her palm facing students waiting to get on the bus to indicate they must wait before crossing the street.

When it’s safe to cross, the driver will give a “thumbs up” then point his or her index finger the direction in which the child should cross the street. In the afternoon, the process is repeated, but going the other way as students get off the bus.