New Signs Installed to Increase Safety on Highways 2 and 395 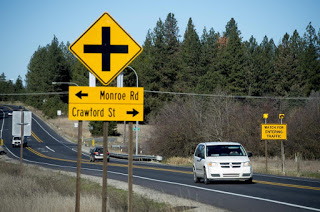 Three new warning signs with yellow flashing lights are up and running on north Spokane County highways to improve safety.


According to the Spokesman-Review, the signs, along with wider lane markers and reflectors, were installed recently to reduce the numbers of collisions at three intersections.

The intersections include U.S. Highway 395 at Burroughs Road and at Crawford Street.
The third sign is on U.S. Highway 2 at Colbert Road.

From 2010 to 2014, the stretch from Burroughs Road to Crawford had 65 accidents, including two fatalities.

Two-thirds of those crashes involved vehicles entering the highway from side roads, said Glenn Wagemann, regional traffic engineer for the state Department of Transportation.

At Colbert Road, there were 19 crashes during that time frame, including two with serious injuries.

The signs and lights warn oncoming drivers on the highway that another driver might pull out from the side. The signs have pavement sensors that detect when a driver is stopped and waiting to enter or cross the highway from side roads.

The signs cost $100,000. Also, the state changed striping at the intersections to better control crossings and turns. The new signs at Deer Park were installed even though Washington State Department of Transportaion plans to reconfigure traffic with roundabouts in 2018.