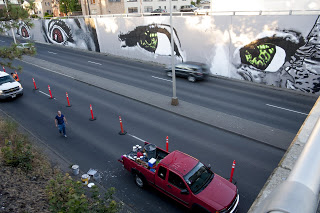 You will have something new to look at soon if you drive the Maple-Ash corridor north of the Spokane River. Or maybe it will be looking at you.


According to the Spokesman-Review, a new mural, consisting of several pairs of eyes, has been painted on the retaining walls at the north end of the Maple Street Bridge.

The creation was commissioned by the city of Spokane to celebrate the 25th anniversary of the Spokane Waste-to-Energy Plant.

So what do eyes have to do with the Waste-to-Energy plant? The artist, Todd Benson says they represent the people of Spokane and the environment they all share. The city’s logo and another logo commemorating the anniversary of the plant were painted on the walls beneath the Broadway Avenue overpass.

Funding for the $10,000 mural is from a budget for celebrating the Waste-to-Energy Plant’s 25th anniversary and is intended as a gift back to the community.