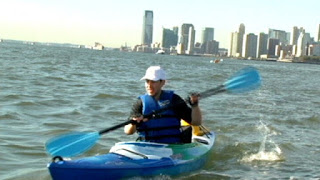 Tired of sitting in traffic on your way to work each morning? Try an alternate commute. Like in a kayak. That’s how how man gets to his job in New York.

Zach Schwitzky paddles to Manhattan from Hoboken, NJ across the Hudson River; a 20 minute ride. He stores his kayak at the Pier 66 marina and walks the rest of the way to work- a total of a 45 minute commute.

Until his business moved further across town, Schwitzky wheeled his 12 foot boat ten blocks there on a dolly.

The idea to avoid traffic came to him after a late night wait at Port Authority’s bus terminal. He’s been doing it for four years now and loves it because it’s free, gives him a daily workout, takes less time than when he was commuting by ferry boat and car, has some amazing views, and leaves no carbon footprint.