New App For Meeting People at the Airport 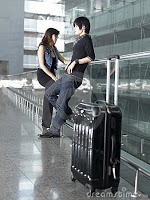 Killing time at the airport waiting for a flight? Single? Then the new app, Btrfly, could be for you. The airport dating app lets users log in using their flight details or airport, and are then shown a list of other users who are in the same airport or even on the same flight.
The app gives information on where other users are flying to, and what time, to ensure you know you’ll have enough time before they jet off. Seems like possibly too much information though, in my opinion.
Some are calling Btrfly “Tinder for airports,” although the company says it’s not specifically for dating but could be used to meet new friends headed to the same destination or even find people just to share cabs with.