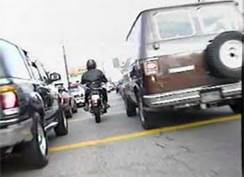 Nevada could become the first state to allow motorcyclists to legally drive between two lanes of traffic.

The maneuver, called lane splitting, is now illegal in 49 states. California “unofficially” allows it, with no law specifically allowing or prohibiting the practice.
Supporters argue lane splitting reduces the likelihood of a motorcycle hitting a car in front, and vice versa, especially in heavy traffic. Detractors argue lane splitting is inherently dangerous and distracts from other safety issues such as mandatory helmet laws.
RGJ.com has the full story.