Move Over Snow- Rain is the deadliest weather driving hazard 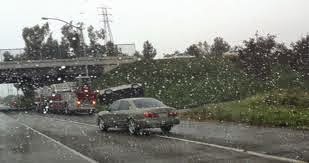 When you think of weather conditions that cause poor driving conditions, snow and ice are the first thing that comes to mind right?

Wrong- it turns out rain is the most deadly driving hazard, according to KTVB TV.

An analysis of federal data shows that rain causes more driving fatalities than snow in 39 states.
In fact, car accidents are the deadliest weather hazard in the United States and kill about 7,000 Americans a year.

The Auto Insurance Center compiled the report using National Highway Traffic Safety Administration data from 2009 and 2013. It says the number of deaths caused by rain are higher than by other types of weather because drivers are less likely to be cautious in rain than snow, rain makes roadways that already have oil on them slick, rain impairs visibility, and even states that don’t get snow get rain.

Even with those numbers though, it’s important to note that far more people are still killed as a result of reckless driving, speeding and drunken driving every year.