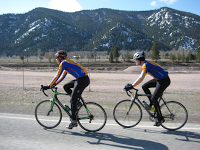 I think it’s been a couple years now since staff at the City of Spokane Valley developed, and City Council members adopted, the Bike and Pedestrian Master Program (BPMP). Staff recently put together a map showing bike and pedestrian improvements that have been accomplished since the BPMP  came out.

A paragraph that announced the map says that, in many instances, the BPMP has strengthened the City’s ability to leverage grant dollars to develop bike and pedestrian facilities.

Here’s the map. Looks like the Valley has been pretty busy the past couple years. Zoom in on the map to see the “balloons” that tell what improvements have been made.