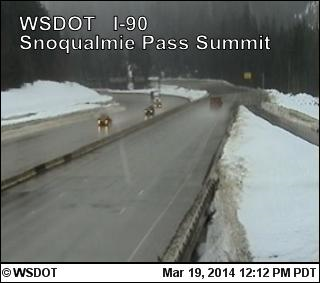 Construction is scheduled to start on Interstate 90 east of
Snoqualmie Pass in early April and the Washington State Department of Transportation wants to give you an early heads up in
order to avoid major construction-related delays.

Starting April 12, I-90 will be reduced to a single lane in each direction
for two weeks, including weekends, in order for crews to build detours for the
2014 construction season. They will also remove the 64-year-old snowshed (that tunnel thingy you drive under that keeps avalanches from dropping snow on your car).

Don Whitehouse, WSDOT regional
administrator, recommends planning ahead. “During the single lane closures, drivers will need to change
their travel plans in order to avoid delays of up to two hours. We suggest you
travel early in the morning, go later at night, find an alternate route or
postpone your trip until after April 25.”
The work is part of the $551 million project to build a wider and safer stretch of I-90 throught the mountains.