Looking To The Future of Transportation in our Area 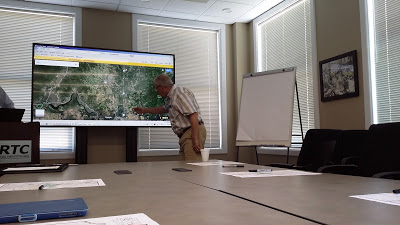 Every four years, SRTC is required by the federal government to update our long-range transportation plan, Horizon 2040. The plan was accepted by the SRTC Board in 2013, so we will be updating it in 2017. Before that though, SRTC staff is trying to get an idea on what has changed locally in the past four years, such as new trends (self-driving cars, electric vehicle highways, etc.), planning methods, land use ideas and rules, and more. We are doing this by sitting down with members of the public in a series of “roundtable” discussions with various groups.

Yesterday we met with members of local plan commissions, including the Liberty Lake, Millwood and Spokane County commissions, and heard some pretty interesting things. Here is a sample of what we heard:

More roundtables will be held throughout the summer and fall and we will present what we learned to the SRTC Board in approximately November. After that, the information will be used to shape the update to Horizon 2040 as we get to work on it in early 2017.