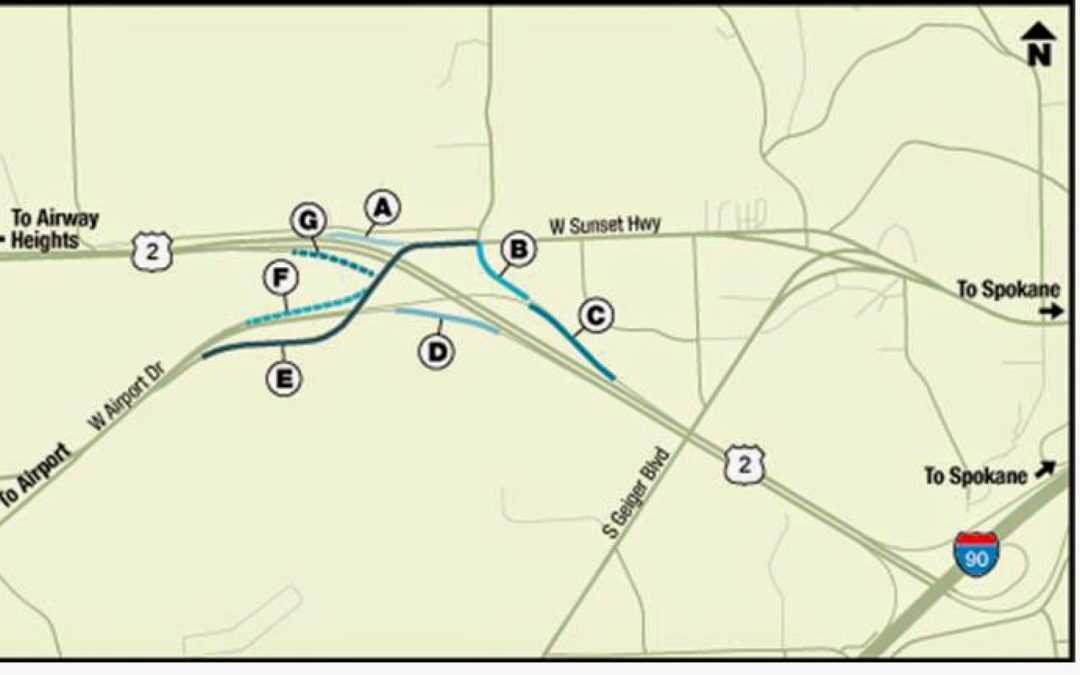 WSDOT
US 2/Espanola Road to Interstate 90- During the following
days and hours, single-lane segments of on and off ramps leading to and from
Spokane International Airport (SIA) on US 2 and Sunset Hwy. will be closed for
construction. Detours will direct drivers to and from SIA. Expect delays and allow plenty of time to reach your destination to avoid missing
flight connections. 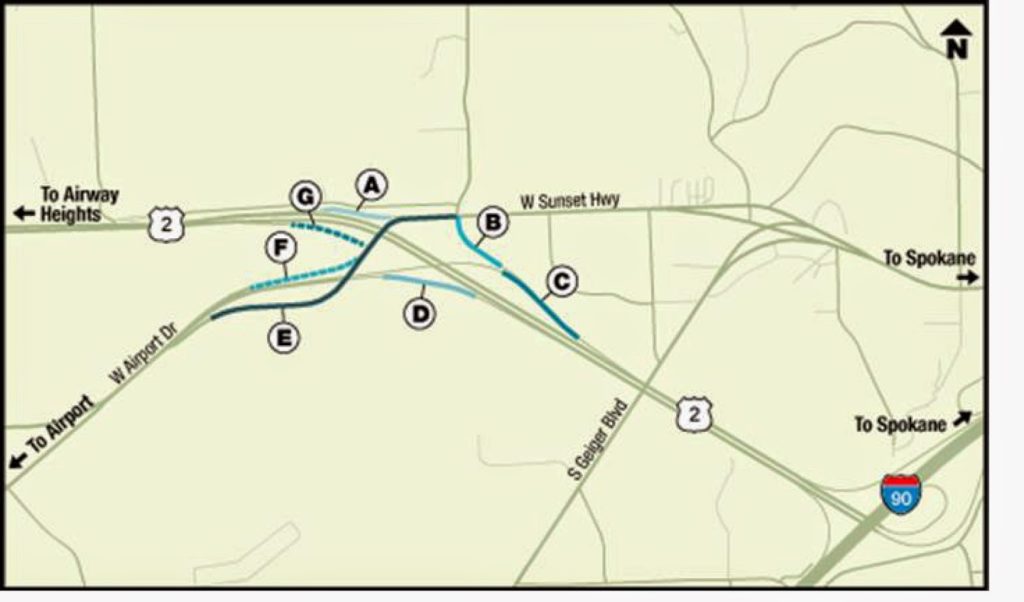 Letters in parentheses
correspond to ramp location on diagram.
Thursday evening, August 28
into Friday morning, August 29, 9 p.m. until as late as 5
a.m.
(F)-Westbound Sunset Hwy. to
Westbound Airport Dr. on-ramp (to the airport)—Closed for grinding
(G)-Eastbound US 2 off-ramp to Westbound Airport Dr. (to the airport) or
Eastbound Sunset Hwy.—Closed for grinding

Midnight until as late as
3:30 a.m.
(C)-Westbound off-ramp from US
2 (& I 90 Spokane) to Westbound Airport Dr. (to the airport)—Closed for
paving
(B)-Westbound US 2 off-ramp to
Westbound Sunset Hwy. will also be closed due to (C) closure

Friday evening, September 5
into Saturday morning, September 6
7 p.m. until as late as 4
a.m.
(B)-Westbound US 2 off-ramp to
Westbound Sunset Hwy.—Closed for paving
Flint Rd. Intersection- Between 7 p.m. and 6 a.m., Monday through Friday, intermittent lane closures in the vicinity of Flint Rd. to resurface the highway and install a signal system. Flint is closed from US 2 to the south. A detour is
available. Flint Road is closed to the north between 7 p.m. and 6 a.m., Monday
through Friday. Grinding and paving will continue between the hours of 7
p.m. and 6 a.m. from Fairchild Air Force Base through Airway Heights and towards I-90.
US 2/Airport Road Overpass Bridges- Tuesday through Thursday,
Sept. 2-4, from 7:30 a.m. until as late as 3:30 p.m., US 2 may be reduced to
one through lane in the vicinity of the airport interchange to repair a bridge deck.  All on and
off ramps will be open.
I-90/Liberty Park to
Havana Street- During evening and overnight hours, from about 9 p.m.
until the following morning at 5 a.m., be alert for possible
on and off ramp closures as crews replace light poles. Also watch for outside lane closures from 7 p.m. to
the following morning at 6 a.m.
SPOKANE CITY
Sidewalk Closure- Five
Star Concrete closed the sidewalk and parking lane on Sprague/Washington/1st to repair concrete. The closure ends Sept.
2.
Residential Grind and Overlay Project- This project will grind and overlay the following streets:
o   Pittsburg
Street from Heroy Avenue to Wellesley Avenue and Heroy Avenue from Helena
Street to Pittsburg Street. Work is substantially complete.
o   Arthur
Street from 13th Avenue to Newark Avenue (excluding 9th
Avenue west to 9th Avenue east)
o   Excell
Avenue from G Street to the beginning of the cul-de-sac east of Audubon Drive.
Removal work has begun.
East Sprague Lane Closure- One lane
will be open each direction on east Sprague from Hatch to Scott Streets while crews construct a combined sewer
overflow facility across from the City’s Sewer Maintenance
Facility.
Grind and Overlay Project- Work is expected to start
Sept. 2 on the Calispel Street section beginning with asphalt grinding and
existing concrete curb and sidewalk removals. This
project will grind and overlay Addison Street from Columbia Avenue to 525
feet north of Dalke Avenue. Crews will also replace a water main in Calispel Street from Wellesley Avenue to Queen Avenue.
Kendick Avenue Water Main- Crews will replace a water main in Kendick Avenue from approximately 1,200 feet west of Nine
Mile Road to Nine Mile road. A detour is in place.
Lincoln/Monroe Construction-  Lincoln/Monroe streets are closed from 7th-17th avenues through mid-October for resurfacing and adding ADA ramps as needed.
High Drive Construction- This project includes pavement reconstruction, storm, sewer, swales, and water main replacement from 29th Avenue to Bernard Street. Phase One construction is expected to last until mid-October. Phase Two of this project, Bernard Street to Hatch Road will begin spring of 2015.
North Division Sidewalk Infill- This project will construct missing
sidewalk in gaps adjacent to Division between Empire and Lyons. Work has begun
on North Division from Lyons to Houston.  There will be a right lane
closure from 10 a.m. to 6 p.m.

Grand Boulevard Construction- McClellan Street between 8th and 9th
Avenue has one lane southbound.  Northbound is detoured onto 9th
Avenue over to Cowley.  9th Avenue/Rockwood Boulevard between
Grand Boulevard and the hospital tower is closed with driveway access.
There is local access only at Cowley and 9th to the hospital.
Southbound on Stevens has access to the medical building on 9th
Avenue.
Traffic will be impacted both north and south bound
mainly between 8th and McClellan, 9th and Rockwood, to
Cliff and Grand. This work will take approximately 3 to 4 weeks. The movement
of traffic will vary as each part of construction in this immediate area also
varies. Work south of 14th
is being done by the Wastewater Department.  This
project will apply preservation treatments that consist of crack sealing, grind
and overlay and some pavement rejuvenation techniques.  Upgrades to ADA
ramps and minor curb and sidewalk repairs will also be done.
Francis from Division to Crestline- Crews are continuing with
removals and replacements for new driveways, curb and sidewalk along the north
side of Francis.  This
project will rehabilitate Francis from Division to Crestline
Streets.  The work is curb to curb and includes installation of ADA curb
ramps, where needed.
SPOKANE VALLEY
8th Ave from McKinnon to Fancher – Closed through
mid-September for resurfacing and stormwater drainage improvements. Signs
redirect traffic via Carnahan, 16th and Bettman/Dickey.

Eastern between Nixon and Valleyway – Rolling closures with restrictions to local access
at times around the clock from 7 a.m. on Tuesday, Sept. 2 through Friday,
Sept. 5 for stormwater drainage improvements. Access to businesses will
remain available.

Sprague between University and Vista – Reduced to two lanes through mid-Oct for resurfacing, stormwater drainage improvements and sidewalk
work. Overnight full closures at the following locations
in the project area will occur between the hours of 9 p.m. and 6 a.m. on
Tuesday, Sept. 2 and Wednesday, Sept. 3 into Thursday, Sept. 4:

SPOKANE COUNTY
Bruce Road Bridge- Closed for replacement. A detour is in place.
Country Homes Boulevard- The southbound lanes of Country Homes Blvd. between Cedar and Wall are closed.