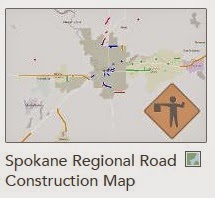 
WSDOT
I-90/Sunset Hill to Barker Road- Sunday, Aug. 30 through as late
as Thursday, Sep. 2, from about 6 a.m. until as late as 3 p.m., be alert for right lane restrictions with possible slow traffic for shoulder sweeping.
I-90/Medical Lake Road Bridges to Four Lakes
Interchange- Monday, Aug. 31 through Thursday, Sep. 3, from about 8 a.m. until 3:30
p.m. eastbound or westbound I-90 will be reduced to one lane for bridge maintenance and pavement patching. Be alert for slow traffic, congestion, and possible delays.
US 2-Division Street @ North River Drive- On Friday evening, Aug. 28
into Saturday morning, drivers on Division Street should expect lane
restrictions as crews work on the adjacent sidewalk ADA ramps.
SR 206/Bruce Road to Mt. Spokane State Park Gate- Be alert for
some delays with flaggers and/or pilot cars directing single-lane, alternating
traffic to accomomodate paint striping.
US 195-Southbound/I-90 to Excelsior Road (MP 95-87)- Be alert for
southbound US 195 reduced to one lane in multiple work areas with
possible slower traffic for pavement repairs. A
temporary speed reduction of 45 MPH is in effect for the southbound
lanes.
US 395/North Spokane Corridor/Little Spokane
River Bridge- On Tuesday, Sept. 1, from about
8 a.m. until as late at 2:30 p.m., be alert for right lane
restrictions in the northbound lanes during the morning, then switching to
southbound in the afternoon for a bridge inspection.
SR 290-Trent Ave./Sullivan Road to Idaho State Line- From about 6 p.m. until as
late as 6 a.m. the following morning, paving, shoulder work, rumble strip
installation, and pavement marking work will be underway along SR290 between
Wellesley and the State Line. During these hours drivers should expect
delays of up to 20 minutes with flaggers and pilot cars directing single lane
traffic.
SPOKANE VALLEY
Argonne from Appleway to Sprague – Lane closures from 7 a.m.
until 7 p.m. until early September. One lane will remain open at all times.
Main
at Mullan – Access from Main onto Mullan
will be closed at times from 7 a.m. to 7 p.m. weekdays through late August.
Mansfield Avenue between Pines
Rd. and Houk Rd.– Narrow lanes from 7 a.m. until 5:30 p.m. through
late September for utility work and road reconstruction.
Mullan from Sprague to Broadway- Lane closures from 7 a.m. until 7 p.m. until early September. Two lanes will remain open at all times. Night work will take place from 8 p.m. until 5:30 a.m. on August 31
through September 2. Detour via Sprague, Vista and Broadway will be posted.
Sullivan from Trent to Wellesley – Reduced to one lane each direction through late August.

·
The southbound
Sullivan Road Bridge across the Spokane River is closed until spring 2016 for
bridge demolition and replacement work.
Traffic is reduced to one lane northbound and two lanes southbound.
·         Reductions to
one lane southbound Monday through Friday between 5 a.m. and 3:30 p.m.
·
Turns from Indiana
onto northbound Sullivan are reduced to one lane.
·
Expect construction
vehicles in the project area.
·       The Centennial Trail
below the bridge remains closed with signs redirecting trail users onto surface
streets.

Old Trails/Inland Road from Riverside State Park to Marchand Road- Road closed and restrictions from Seven Mile Road to the State Park for reconstruction and paving.

SPOKANE CITY
School Speed Zones- School is back in session for Spokane Public Schools on Monday, Aug. 31 so slow down and obey the reduced speed limits in school zones.

Upriver Drive Closure- The north half of Upriver
between Stone and Regal will be closed from Friday, August 28 until Tuesday, September 1 for
asphalt repair.

Sunset Highway Lane Closure- Two
lanes on Sunset Highway near Grove Road will be closed to install a water main until Monday,
September 7.

Sprague Lane Closure- Avista
will be closing the northern lane of Sprague from 1214 W Sprague to the
intersection of Adams to install underground conduit until
Monday, September 7.

Francis Avenue ITS Devices Installation Project- This project calls for installation of
Variable Message Signs, Closed Circuit TV systems, fiber optic cables, and
other related miscellaneous items from Division to the east city limits. Intermittent lane closures
for the duration of the project.

Monroe/Lincoln Couplet Work- The project includes water main installation and reconstruction of the street from 2nd to 4th Avenues and will replace the asphalt surfacing, including ADA ramps as needed.  Cedar Street between 3rd and 4th
Avenue has one lane available during road reconstruction. Jefferson
Street from 3rd to 4th is closed for mainline
installation. 4th Avenue from Jefferson to Monroe is also closed. Lincoln and Monroe Street both have limited access along the east
half of the street from 2nd to 4th Avenue.

First Avenue from Helena to Altamont- A residential grind and overlay pavement preservation project. Work includes subgrade repair, crack sealing, ADA ramps, striping
and traffic control. Closure
of 1st Avenue will last until September. The corner of Napa and 1st is closed with a detour provided.

Rowan Avenue Improvements- This project includes reconstruction of the street from Driscoll Blvd. to Monroe Street. The project also includes installation of bike lanes, filling sidewalk gaps and replacing water lanes. It will last until October.

Havana Street Improvements- Glenrose Road from 57th Avenue to
Havana Street is closed. Work is underway at the intersection of
Freya and 44th with traffic and pedestrian improvements. Improvements include full width pavement
replacement, complete sidewalk gaps and porous asphalt bicycle
lanes.  This project will also include installation of a water
transmission main between 37th Avenue and the Brown Park reservoirs
at 57th Avenue.

Indiana Avenue Roadway Replacement- Indiana is closed from
Division to Dakota.This project will include full depth roadway
replacement and change lane configuration to one lane each direction with bike
lanes.

High Drive Sewer Overflow Project- This project includes pavement
reconstruction, storm, sewer, swales, and water main replacement from
Bernard Street to Grand Boulevard. 43rd Ave. from Garfield St. to Perry St. will be closed until late September with a detour via Perry.Construction is expected last
through the fall. This week’s work includes;