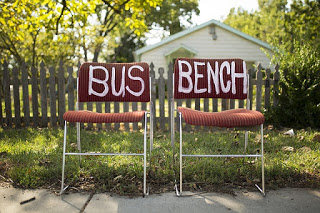 In some cities “guerrillas” paint their own crosswalks. In others they make bike lanes at night either with paint or by lining the side of the roadway with planters or other items. In Lawrence, Kansas, LJWorld.com reports, they take matters into their own hands by putting folding chairs at bus stops that don’t have benches. Way to get crazy, guys. And so that no one would be confused, they wrote “bus bench” or “bus stop” on the chairs.

The folks responsible for the guerrilla bus benches said they put them there because they were tired of watching people stand, especially elderly people and one man in particular who walks with a cane. That was just the beginning though. Since then, more chairs and benches have been popping up at transit stops around the city.

The message isn’t lost on transit officials though. Lawrence Transit officials say the makeshift benches started a conversation about constructing a new transit hub and providing benches at 15 stops around the city. They’ve also agreed not to remove the chairs, even though some are in the public right-of-way, until Lawrence Transit can do an analysis on the need for benches.