Is The 85 and Over Crowd Taking Over the Roads? 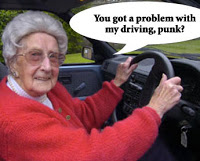 Here’s an eye opener: drivers over the age of 85 are now the fastest-growing segment of American drivers. According to the Orlando Sentinel, their numbers doubled between 1998 and 2013- to amost 3.5 million. Kind of concerning when you consider that the Centers for Disease Control and Prevention report that, per mile traveled, fatal crash rates increase starting at age 70 and are highest for driver over the age of 85. The CDC says this isn’t because they are more likely to collide with something, but because they are more likely to succumb to injuries when involved in crashes.